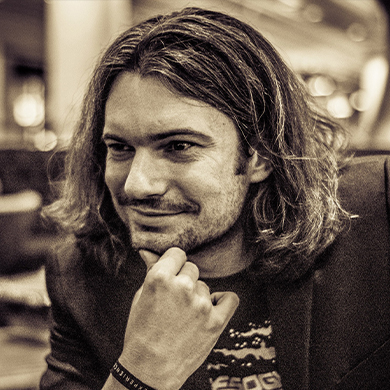 Harry started his career as a gameplay programmer with an undying passion for game design. He has played a central part in the creative imprint of Housemarque, where he has helped keep the arcade spirit alive for the last 13 years. Before Returnal, Harry notably acted as a Lead Programmer for Resogun, and made his debut as Game Director with the critically acclaimed Nex Machina. Most recently he was the Director of Returnal for Playstation 5, which brought the studio's arcade heritage to a 3rd person experience and heralded the beginning of a bold new chapter for Housemarque.

Housemarque has a celebrated history that has solidified their reputation as masters of arcade gaming with critically acclaimed games such as Resogun and Nex Machina. During this intimate fireside chat, Ilari Kuittinen and Harry Krueger will share the studio's fascinating history starting as a small studio far from the industry center, to their ambitious push to create a much larger and extensive project, Returnal. They will explore the important decisions that they had to make during their studio's rise as well as the challenges and successes in keeping their studio culture and DNA intact as their team continued to grow along with the expectations.