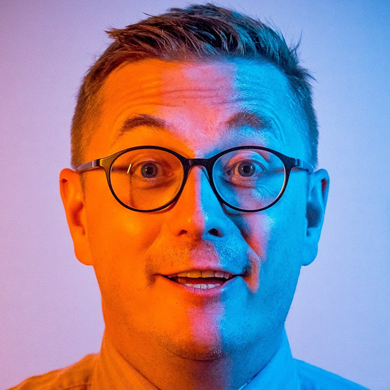 Dave set up Dream Reality Interactive in September 2016. The team has a rich history in developing VR, AR and singing games, some of whom worked with Dave at Sony's London Studio. DRIs first game was released on iOS December 2017; Orbu is an AR mini golf game. Arcas Path, their first VR game is  released later this year by Rebellion. DRI were the interactive partner on VR experience. Hold the World with Sir David Attenborough (a Factory 42 production for Sky TV)​

Prior to Dream Reality Interactive, Dave was the Director of Sony's London Studio, the home of multi-million selling game franchises SingStar, Wonderbook and PlayStationVR Worlds.

Before heading up London Studio he was an Audio Manager, Creative Services Manager, Executive Producer on games SingStar and Wonderbook, and has  released a number of dance records.

We are all very well adjusted to our computer interfaces. Keyboard and mouse, game pad, touch screen. All these give us a method of interacting in 2d or pseudo 3D environment. Immersive interfaces are substantially different. Fundamentally, we are interacting in a full 3D environment. And we can do this in a number of ways. With our hands, with our eyes and head position and even with our voice. This gives us a whole new paradigm of interaction and paved the way for how we will Interact with computers and each other in the future. By looking at some of dream realitys recent projects thus talk will examine New interfaces for immersive entertainment.